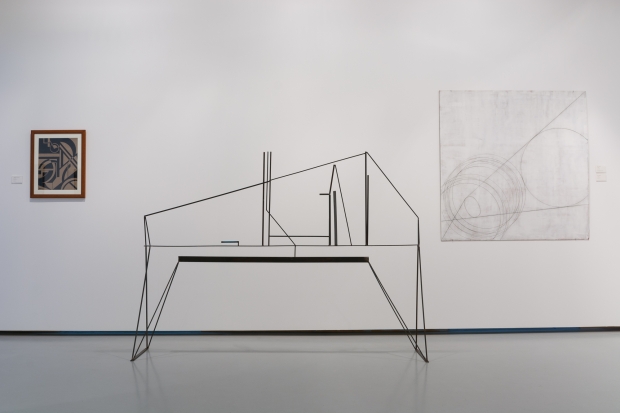 It is a great pleasure to present Northern Norway Art Museum’s exhibition programme for 2016. At the museum in Tromsø we continue focusing on the collections and on various sculpture projects. At Kunsthall Svalbard, the museum’s newly established satellite in the Arctic region, we welcome two leading Norwegian contemporary artists who have also won international distinction: AK Dolven and Olav Christopher Jenssen.

The sculptor and installation artist Kjell Varvin (b. 1939) works with industrial metal. He is perhaps the most important exponent of the Arte Povera movement here in Norway. Varvin is well-known in art circles and has exhibited widely, not least at the Arctic Arts Festival Exhibition in 2015, but he is less known amongst the wider public. With this monographic exhibition, Northern Norway Art Museum presents an important artist and his oeuvre.

Håkon Anton Fagerås (b. 1975) is a young sculptor who works in a classic, craft-based idiom, producing sculptures carved in marble in Carrara, Italy. His subject-matter, however, are contemporary, and often from his personal sphere. Fagerås has also created monuments commemorating the Arctic explorers Roald Amundsen and Fridtjof Nansen. The exhibition is produced through collaboration with Vigeland Museum, which will be the show’s first venue during the 2016 summer season.

AK Dolven’s monumental video work Ahead, which was shot in Lofoten, was comissioned for her large solo exhibition at Northern Norway Art Museum in 2009. It will now be presented for the first time since 2009, at Kunsthall Svalbard.

AK Dolven (b. 1953) lives and works in London and Lofoten and is reckoned to be one of Norway’s foremost contemporary artists. She has a considerable international reputation and is one of the pioneers of video and installation art.

As the first participant in Northern Norway Art Museum’s Artist in Residence programme at Kunsthall Svalbard, Olav Christopher Jenssen will spend April and May 2016 on Svalbard (Spitsbergen). He will participate in various expeditions and gain an impression of the local society and nature.

In Kunsthall Svalbard’s summer exhibition, Jenssen will present the result of his sojourn on the island.

Olav Christopher Jenssen (b. 1954) lives and works in Berlin and is a professor at the Braunschweig University of Art. He has exhibited at numerous international museums and his works can be found in the collections of (among others) MoMA – Museum of Modern Art, New York; Marta Herford Museum, Germany; Moderna Museet, Stockholm; and Astrup Fearnley Museum, Oslo.

Thinking at the Edge of the World: Perspectives from the North
Mid-June

“After the opening of Kunsthall Svalbard in February 2015, we have experienced considerable intrest from artists and curators, also internationally”, says Northern Norway Art Museum’s director Knut Ljøgodt, who also is Founding Director of Kunsthall Svalbard. “The time is now ripe for seeing how we can develop this further. We will use the conference to explore the possibilities in the Arctic region with people from a wide range of disciplines”, Ljøgodt adds. One idea that will be explored concerns the possibilities for a major art event on Svalbard.

Office for Contemporary Art Norway’s Director Katya García-Antón tells about the institution’s interest in Northern Norway: “OCA has dedicated significant time researching the North of Norway in the past year.” About the conference, she adds: ”We are delighted to collaborate with the Northern Norway Art Museum in Svalbard, and in particular in the organisation of this prestigious international, cross-disciplinary conference.”

I Craft, I Travel Light

Regional exhibition organised through collaboration with the Norwegian Association for Arts and Crafts. During autumn 2016, I Craft,I Travel Light will be on show at museums in Arkhangelsk and Murmansk, and in spring 2017, at Northern Norway Art Museum in Tromsø.

Withdrawal of the Red Army

This exhibition is produced through collaboration with Russian-Norwegian artist and curator Ivan Galuzin. The starting points for the project are drawings made by Russian soldiers stationed at Kola during World War II. The exhibition reflects on themes such as war aesthetics, time, memory and repression. It includes works by several internationally-recognised contemporary artists such as Gustav Metzger, Asta Gröting, Amilcar Packer and Leonard Rickhard.

Withdrawal of the Red Army is on show at Northern Norway Art Museum through 25 January 2016. In the spring it will travel to Kirkenes, Murmansk and Arkhangelsk, and in the summer will be at Blaker Gamle Meieri in eastern Norway.