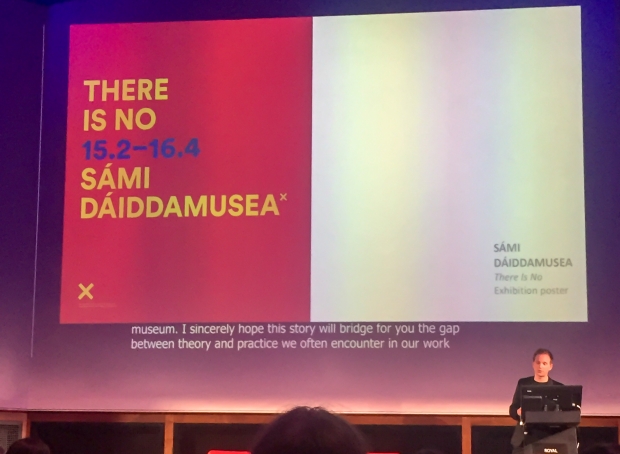 When director Jérémie goes to conferences, he has one goal: more punk rock in museums!

Ok, that might be a bit simplistic, but based on feedback on Twitter after his presentation, you might get more Ramones in museums all over the world.

General takeaways on what is needed in the museums next: #museumnext pic.twitter.com/XaKMozHizX

MuseumNext is an international museum conference asking the question whats next for museums? 550 participants from 40 countries came to London for last week's conference, and many want something new and different for museums. Jérémie says that both among the presenters and the audience, people try to challenge the traditional concept of what a museum is, and they want new ideas that are including, playful and accessible.

Jérémie was one of the few allowed on stage, where he presented our Sámi Dáiddamuseum project and explained the background, implementation, and future of the project:

In his youth, he was in a horrible punk band, and he tries to transfer the mindset from that era into both his daily work and his presentation in London.

- I felt at home, there was a great feeling of togetherness at the conference, Jérémie says. - There was a culture of be yourself and just do it, and that appeals a lot to me. Just like in punk, the idea is that if you want to do something new and different, just try! This is something we need more of, also in Norway and the other Nordic countries.

In our view, Jérémies selection to present and the very nice feedback he got, means we've done something right. But there's also a lot of room for improvement and realization of a much bigger potential. We can do so much more!
That's why we want to hear from you, your friends, uncles, aunts and everyone else! We want to talk with you about what you want, what you need us to be. We hope to establish good arenas for coming together in the close future, but until then, contact us, yell at us, and bring us your ideas and desires!

Summer at the museum