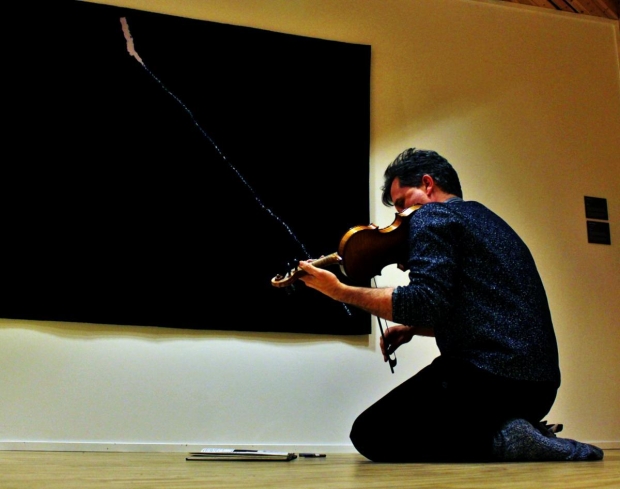 April 25th marked a unique art event in Kunsthall Svalbard. The internationally renowed violinist, composer and writer, Peter Sheppard Skærved, held a concert in dialogue with Tegn V by Jan Groth, right in the middle of the exhibition Northern Sphere. Skærved is a passionate lover of visual arts, and has worked on interdisciplinary art projects with international monoliths like The Metropolitan Museum in New York and Tate Britain in London. Tegn V is designed by Jan Groth and voven by his wife Benedikte Groth. The concert was unpretentious in its simplicity, but a spectacle of interplay between music, philosophy, poetry and visual arts.

Skærved has been cooperating with the Norwegian artists Jan Groth for years, and the two continuously exchange drawings, music, writings and ideas. Jan Groth is this year's Festival Artist at Bergen International Festival, and Peter Sheppard Skærved will join him there and «enchant and disturb visitors to the festival exhibition of the work of Jan Groth». Skærved showed the audience several notebooks of Groth's sketches for Bergen, surrounded by Skærved's scribbles, musical notes and drawings. Below you can see and hear a piece from the concert, inspired by Groth.

When Peter Sheppard Skærved entered Kunsthall Svalbard for the first time, our employee Rakel was in the middle of a workshop with local school kids. The children's curiosity, enthusiasm and play in response to the art inspired Skærved write the piece Stone, paper scissors/cloth, leather, gravestone, which he performed the same night:

Skærved also played several short classical works, and we'll treat you to this piece written by Guiseppe Torelli in the 1680s:

You can read more about Peter Sheppard Skærved's fascinating story about his journey to Svalbard and his friendship with Jan Groth on his homepage. 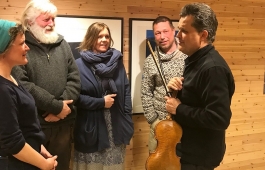 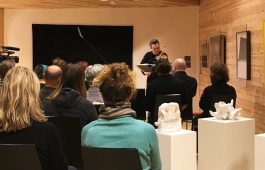 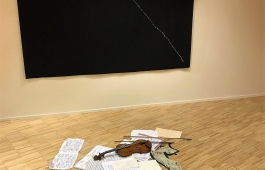 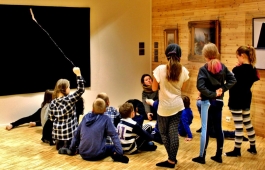 Summer at the museum