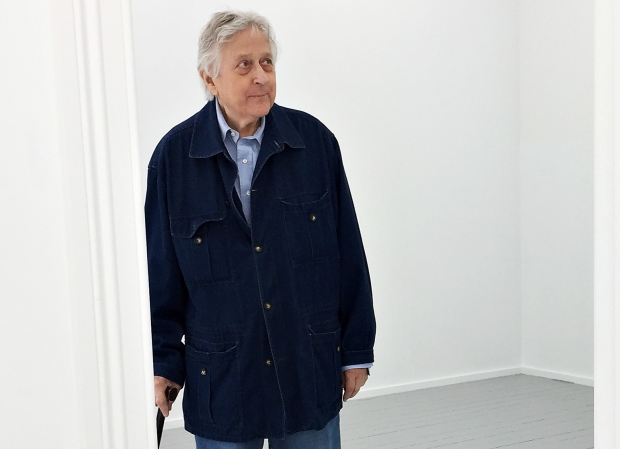 We would like to congratulate Jan Groth on being this year's festival artist at The Bergen International Festival. Jan Groth has been a good friend of the museum and a close collaborator for many years.

We've had several Groth exhibitions at Nordnorsk Kunstmuseum. Parallels in 2011 was a group exhibition centered around Groth and his circle, including among others Inger Johanne Grytting, Iver Jåks and Stein Rønning. Additionally we featured a solo exhibition on his work in 1996 and Jan Groth, Drawings : Tone Vigeland, Sculptures in 2002. The gobelin Sign V was a central piece in the exhibition Northern Sphere at Kunsthall Svalbard this spring, where we saw Groth's friend and collaborator Peter Sheppard Skærved do an amazing concert i dialogue with Groth's tapestry. Sheppard Skærved is also a part of the Festival exhibition in Bergen.

A generous artist
We have several works by Jan Groth in our collection, both gobelin, drawings and sculptures. Not only did he donate several of his own works, Groth also donated works by other artists he values. In 2010 he saw a drawing at Kurant gallery in Tromsø by Hans Kristian Borchgrevink Hansen. He promptly bought it and donated it to Nordnorsk Kunstmuseum. Groth has also donated works by Heidi Kennedy Skjerve and Stein Rønning.

Essential to Jan Groth's art is the line. He has explored it in both drawings, paintings, tapestry and more recently in sculpture. He has challenged artistic conventions on material use and is one of few Norwegian artists represented in the Museum of Modern Art in New York.

Big in Japan
Conservator at Nordnorsk Kunstmuseum, Charis Gullickson, says he is quite popular in Japan.

- I think it's because of the expression. In a way Jan Groth is a minimalist, but he's also an expressionist that lets his hand be a part of the piece, Gullickson says.

His line has been in constant change through is artistic life, and that's what makes him an interesting artist. It is therefore highly deserved that he is this year's Festival artist.

- I'm really happy for him, and it's not a moment too soon, she says, and adds:

- Groth is a generous grand old man in the Norwegian art scene and a very relevant artist that has been able to constantly reinvent himself. This is definitely a must-see exhibition.