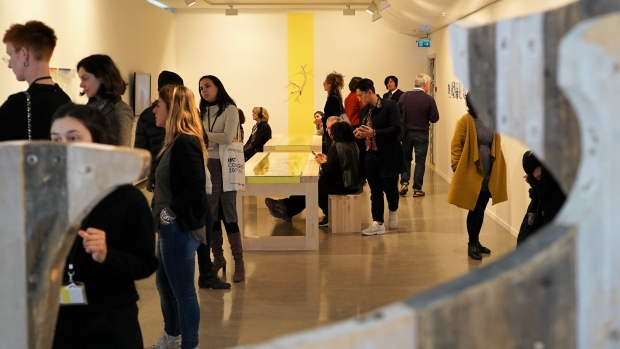 18.472 people visited Nordnorsk Kunstmuseum in Tromsø in the first six months of 2017. That's an increase of unbelievable 38,5 % (or 5139 persons) compared to 2016. This is the highest spring attendance ever, and is a good indication that 2017 might be the best year in our 32 years of existence.

Connecting with the locals

Director Jérémie McGowan thinks the record is due to how this year's exhibitions feel more relevant and interesting to people in Northern Norway.

- The two major exhibitions this year both consist of art from and about the North, art that deal with identity, history, tradition and the complex society we all live in, he says.

The museum performance Sámi Dáddamusea focused on Sami contemporary art and the fact that there is no Sami art museum. I Craft, I Travel Light exhibits traditional arts and crafts with a modern twist. Both exhibitions are collaborations with other art institutions (RiddoDuottarMuseat and The Norwegian Association for Arts and Crafts), and both exhibits consists of works by a large and diverse group of artists.

Big hopes for the rest of the year

McGowan thinks 2017 will continue to be well attended. - Both exhibitions are still open in Tromsø, and later this year we will reopen the permanent exhibition of our collection. The next six months at Nordnorsk Kunstmuseum will be just as exiting as the first.

The numbers are from Nordnorsk Kunstmuseum in Tromsø. Attendance at Kunsthall Svalbard, the Arctic Art Festival exhibition Subsistence and other regional exhibition will be ready at a later time.